The T&D family of companies
& company of families 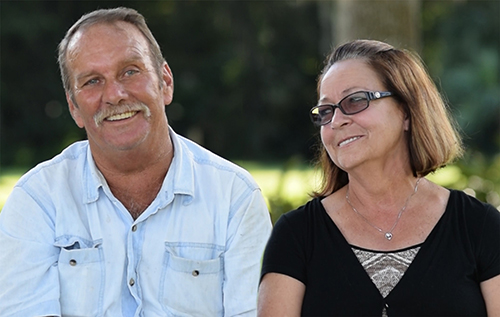 There is a reason why, even 30 years after Terry Yoder first opened the doors, so many people continue to do business with the T&D family of companies. The story starts in 1981, when Terry and his wife Glendora—everyone calls her Glen—moved to Leesburg from Michigan to make a better life for themselves and their two children. Terry ran an ad in the paper, “Concrete finisher needing work,” and invited his brother-in-law, Darwin, to join him. T&D Concrete was born. Glen kept the books and made sure the men stayed organized and efficient.

In 1994, Darwin decided to pursue other interests, leaving the company solely in the hands of Terry and Glen. Around the same time, T&D began offering concrete block and masonry to the homebuilders in The Villages. It wasn’t long before T&D was providing all the concrete services for virtually every new home built in The Villages.

More than just being in the right place at the right time, T&D flourished because of Terry’s tireless, inspired leadership. As he added employees, he pushed them to be their best and rewarded their excellent work. He established a set of 20 core values divided into four categories-- Honesty and Fairness, Teamwork and Cooperation, Dedication to Customer Needs, and Meeting Commitments—and taught his employees to incorporate them into everything they did.

Terry’s sights were set high. In 1998, he saw the need for a local warehouse where contractors could purchase all their day’s supplies in one place, so he began T&D Supplies, which quickly became one of the area’s leading suppliers of building materials. In 2004, The Villages asked Terry if he was interested in building some of their pools. The new opportunity led T&D to purchase Florida Spa and Pool, a local pool contractor. Terry renamed the company and seamlessly folded it into the T&D family, and before long T&D Pool and Spa Construction became the preferred pool vendor for The Villages. The expansion created more opportunity, and within two years, T&D added two more companies to its portfolio: T&D Pool and Spa Service and T&D Screen Enclosures. Eventually, T&D added a retail pool and patio store and a distribution company that provides lumber and siding products to customers throughout the tri-county area.

The T&D family of companies provides a huge selection of products and services to The Villages and its residents. Terry helms the group of businesses, keeping them debt-free and pointed in the right direction. Each company is run by either a family member or a long-term employee, who, according to Glen, “might as well be family too.” Over the years, T&D has stayed a step ahead of the competition and managed to thrive during the economic downturn—in part because of Terry’s drive and perseverance, and in part because of the talent and loyalty of his employees. In Terry’s words, “T&D is more than just a family of companies. We’re a company of families.”